The Dos and Donts in Youth Soccer 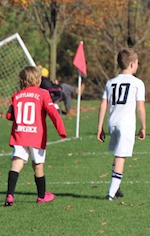 How we should structure youth soccer to provide maximum benefit and appropriate development is a controversial topic, and one that has been hotly debated for many years in the US. How many players? What size field? When do we teach positions?

Success in practice: Keep it small

A youth-appropriate training plan should be oriented toward small-sided match formats, and not toward traditional 11 vs. 11. This theory is not new. However, in spite of support from the experts and the growing popularity of 4 vs. 4 youth leagues and tournaments, old habits die hard.

Many youth coaches try to teach 9- to10-year-olds advanced tactics. Suddenly, players who should still be playing “baby soccer” are supposed to be able to score with World Cup strategies on fields that are much too big for them. The players are learning positions before they can even handle the ball, while their coaches record statistics that have little to say about the true experience of playing soccer.

By now we know that ages 8-12 are an ideal time for developing technique and coordination, and many European countries have made solid progress toward developing training models based on this fact quite some time ago. Here in the US many coaches let adult strategies distract them from true real abilities.

When players try to imitate advanced tactics, in an attempt to learn the game at “match pace”, they are actually missing the their opportunity to lay the groundwork for future performance.

The important concept here is all-around training: Technique and a “feel” for the ball, agility, and ability to react and adapt to various game situations are all typical goals for this phase of youth training. Practice should be “playful” and sensitive to differences in individual abilities.

The relationship between practice and match play

To teach basic concepts, practice sessions must be youth-appropriate, of course, but that is not enough: Matches also must be suited to the unique abilities and experiences of children. A training book is not much use to youth coaches if it requires players to overspecialize in match play, no matter how clever its practice suggestions. The relationship between practice and match play must be clear to everyone. The objectives in one area should be clearly related to objectives in the other. This is the only way to teach basic soccer effectively.

For example, if matches are played without the offside rule, then the more basic aspects of the game become much more significant.

In the 9 vs 9 match, the more talented players and the central midfield players work much harder than defenders and attackers.

Lacticacid levels up to 8.3 mmol/l were recorded in some players! This is clearly physical overload.