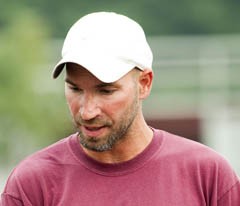 Richard is the most decorated soccer player in the Towson University men's soccer program history graduating in the spring of 1999 winning over 40 awards athletically and academically combined.

Richard ranks as the 4th best athlete of the 20th century.

Richard Möller, Founder & DOC of Maryland F.C., converged all his experiences as a club, college, youth national team and professional soccer player & coach, student and fan of the game into Player Development.

"I was always the smallest and skinniest player while growing up. I did not hit a growth spurt and fill out until I was 18. If this Adult System, which most club teams apply, would have been in place in Germany I would have never played for 1. F.C. Kaiserslautern, the German Youth National Teams, become a DI All-American and be drafted to play professional soccer in the US because bigger and stronger players would have received all the attention!", says Founder Richard Möller.

Please click here for additional information on the club's philosophy and training models.